From road to rail - cutting traffic with 1 300 timber trucks

After a major effort to get timber over from road to rail, Norske Skog Skogn has saved Trøndelag roads for over 1 300 timber trucks in 2021. (Translation of an interview article in the Norwegian newspaper "Nationen" by Lars Kristian Steen, redaksjonen@nationen.no) 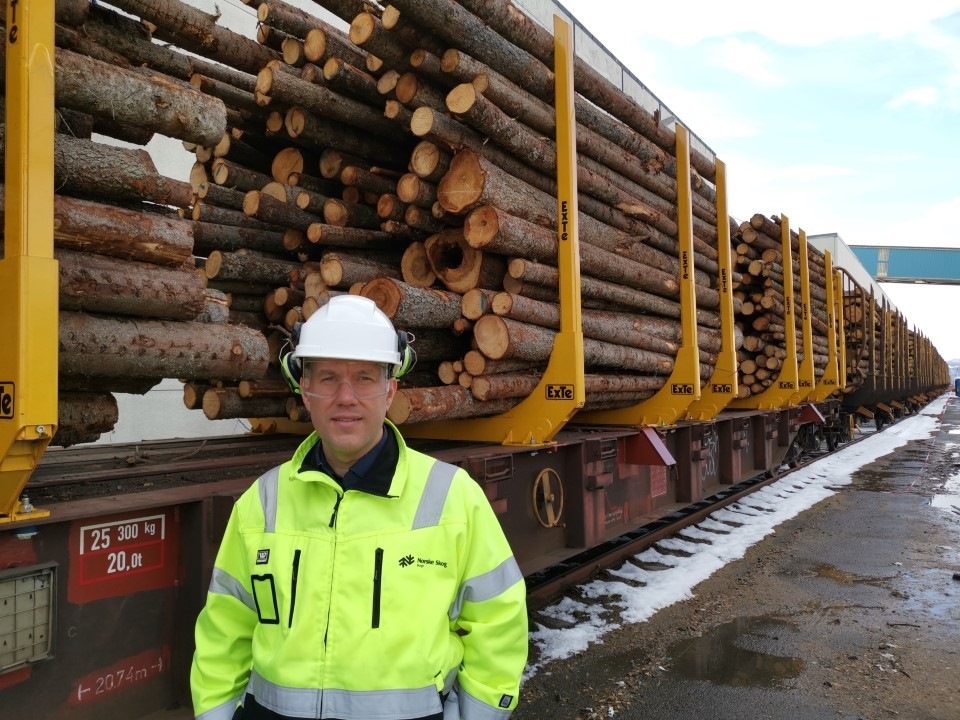 "The project started with a sustainable idea and great collaboration between Bane NOR, Norske Skog and CargoNet", says Purchasing Manager Sigbjørn Dalen at Norske Skog Skogn to Nationen (Norwegian newspaper).

At the end of the year, he is pleased that they have found a much more environmentally friendly and sustainable way to transport timber to the large newsprint mill located in Levanger municipality.

"The idea was to load timber on freight wagons, and drive them quickly and efficiently to the paper mill on rails. It contributes to a sustainable and environmentally friendly operation in several ways; The timber goes on the railway and the factory can use less chemicals", says Dalen, who explains that the newspaper should be as light as possible when printing text and pictures. "If the timber stays put for a long time, it will gradually get darker. Speedy transportation of timber on railways straight from the forest to the mill at Skogn is both environmentally friendly and sustainable"

In recent decades, large quantities of timber have been transported by timber trucks on the road from the south in Trøndelag to the mill in Skogn. Dalen says that the project to get the transport of this timber onto the railway tracks started at a side track at Ulsberg in Støren in Midtre Gauldal municipality in November 2020. Then Senior buyer Bjørn Næsvold in Norske Skog Skogn walked along the empty track, and saw new opportunities: "At Støren there is an emergency terminal for the railway. The freight trains will be routed and reloaded here, if the section towards Trondheim is closed. In Ulsberg, there is a side track towards a quarry. These areas were not used very often", says Næsvold to Nationen. Næsvold contacted CargoNet and Bane NOR to discuss the idea of ​​using this side track in Støren to load timber onto freight wagons and transport the timber by rail up to the mill in Skogn.

"We had the first meeting at the end of November 2020. Everyone thought the idea was good, so we started planning", says Paul Agnar Røvik, Regional terminal manager for Bane NOR's area north. "We quickly found solutions and the road to a result was short in time, but slower in work effort".

​​​​​​​At Støren, a major project was underway with the development of a new train car park, car wash, workshop and diesel tank.

"The emergency tracks were empty, but hectic activity was going on in the surrounding area. At the same time, the site would still have to function as an emergency terminal for reloading goods - from railways to trucks - if the train line is closed. Therefore there cannot be heavy logs along the rail corridor,  blocking transhipment", says Røvik.

He therefore made one demand: We had to be able to clear away the timber to be transported in maximum four hours. This was possible, and thus the collaboration project was in full swing. On 26 January 2021, the first freight train arrived at the terminal. The pace had been high and the effort great in the previous months.

"There has been great commitment and drive. It is impressive how quickly we got started", says Næsvold.

Dalen and Næsvold both thank CargoNet and Bane NOR for having contributed to saving both environment and the business community for climate emissions and money. Røvik, for his part, thanks Norske Skog for the idea, and adds that Spordrift AS has also played an important role in the process.

The result is at least 25 fewer trucks per week on Trøndelag roads, and moving 30,000 cubic meters of timber onto freight trains every year. It's quite a lot, so we are very happy.

"It is fun to work with positive people and achieve something in collaboration with others", says Ola Trolldalen, Sales and marketing manager for industrial trains in CargoNet. ​​​​​​​

Timber on rails from Støren to Skogn