Norske Skog’s EBITDA in the first quarter of 2021 was NOK 112 million, a decrease from NOK 146 million in the fourth quarter of 2020. The markets are still impacted by the Covid-19 imposed restrictions, but are expected to improve during the year as a result of both already effectuated, but also newly announced capacity closures. As announced earlier today, Norske Skog’s board of directors has made a EUR 100 million investment decision to convert one machine at the Bruck (Austria) industrial site from newsprint to recycled containerboard production. This is the first major step of the two planned European conversion projects in the group’s strategy of establishing Norske Skog as a leading independent European producer of recycled containerboard.

- Although the corona restrictions still have a negative impact on our operations, we are cautiously optimistic about the future. The decision to convert the Bruck newsprint machine into packaging will diversify our asset base and create new long-term revenue and cash flows from the end of 2022. Our other fibre and energy projects are progressing according to plan, and will contribute to a long-term sustainable industrial platform. Due to substantial capacity closures announced over the last twelve months, we expect the publication paper market to improve during 2021, says Sven Ombudstvedt, CEO of Norske Skog.

Cash flow from operations was NOK 163 million in the quarter compared to NOK 73 million in the previous quarter, mainly due to a reduction in working capital related to Norwegian CO2-compensation received for 2020 in the quarter. Operating earnings in the first quarter of 2021 were NOK 204 million compared to operating earnings in the fourth quarter of 2020 of NOK -1 276 million. The quarter was positively affected by non-cash change in fair value of energy contracts in Norway and New Zealand amounting to NOK 199 million. Net profit in the quarter was NOK 194 million compared to a net loss of NOK -1 363 million in the previous quarter. Net interest-bearing debt was NOK 401 million at the end of the first quarter, with an equity ratio of 43 %.

Status projects
The conversion at Bruck will introduce 210 000 tonnes of competitive containerboard capacity to meet the growing demand for renewable packaging. The project has received financing commitment from regional banks. Containerboard production will be based 100% on recycled fibre and will use steam from our new waste-to-energy plant starting up in the first half of 2022, making Bruck a cost-leading and green energy producer.

“All credit to our creative engineering teams that have managed in a short notice to produce interliner at Skogn. So far, feedback from the test production have been overwhelmingly positive. This will not only prolong the expected life of the Skogn industrial site, but it will also add an important supplement to our packaging product portfolio. In few years, the majority of our mills will be able to both serve publication paper and packaging markets in a sustainable and profitable manner,” says Norske Skog’s CEO Sven Ombudstvedt.

Norske Skog actively works to realise value from the industrial sites by developing existing infrastructure and industry competence. The work to develop CEBINA into a widely acknowledged commercial product has continued in the quarter following the first commercial sales within epoxy applications in the fourth quarter. The continued development of CEBICO (bio composites) also progressed well in the quarter. The investment into a NOK 20-25 million extruder, enabling a significant increase in the ability and quality of testing with potential customers, progressed further in the quarter.

Norske Skog is the largest shareholder in Circa Group, which in March 2021 was listed on Euronext Growth Oslo under the ticker CIRCA. Following the private placement of approximately NOK 500 million as part of the listing, Circa is fully financed to develop a first-of-its-kind 1 000 tonnes LGO and Cyrene biochemicals plant in France as part of the ReSolute project. 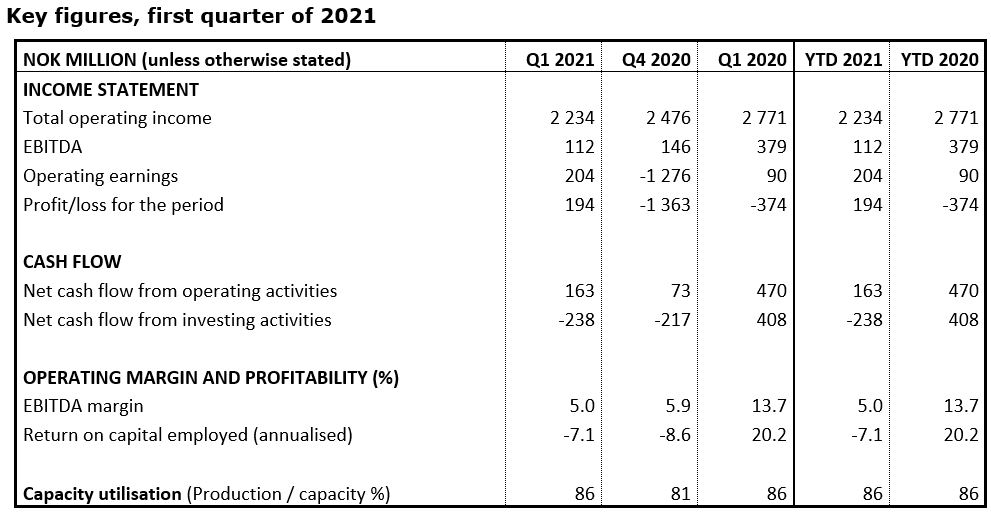 Europe
Operating income decreased from the previous quarter with lower sales volumes combined with a decrease in sales prices due to a weak publication paper market  in the quarter, and a change in product mix and geographic mix. Variable cost per tonne decreased modestly in the quarter. Fixed costs were lower due to lower employee benefit expenses. According to Eurograph, demand for standard newsprint in Europe decreased by 27% through January compared to the same period in 2020. SC magazine paper demand decreased by 22%, while demand for LWC magazine paper declined by 25%. Our capacity utilisation was 88% in the quarter, up from 80 % in the previous quarter.

Outlook
The significant capacity closures announced in 2020, have been completed in the first quarter of 2021 and is impacting the market balance positively raising operating rates in the industry. In addition, the strong demand for packaging grade paper has switched some of the publication paper production to interliner contributing to an improved market balance in the coming periods. Additional capacity closures have recently been announced, and these are expected to maintain and improve the market balance positively throughout the year.

In North America and Asia, sales prices have increased, which also is a leading indicator for the price development in Europe. The improving operating rates provide a foundation for price increases and is further supported by the significant rise in prices for paper for recycling and other input costs. The margins in the industry are not sustainable at the current level, and the increased input cost necessitates the need for considerable price increases in the second half of 2021.

In the fourth quarter of 2020, Norske Skog announced a strategic review of the New Zealand operations, covering both the Tasman industrial site and the Nature’s Flame pellets facility. The Covid-19 restrictions in New Zealand have impacted the process, but the ambition is still to announce an outcome of the review during the first half of 2021. The Tasman industrial site has been repositioned into production of converting paper grade, but the production has been curtailed due to the volatile and high energy prices. There remains uncertainty on how the energy markets in New Zealand will develop, and how this will impact production.

Norske Skog continues its work to improve the core business and has margin protection programmes with cost saving initiatives of approximately NOK 200-250 million. Norske Skog aims to make a final investment decision regarding the conversion project at Golbey PM1 during the second quarter 2021.

About Norske Skog
Norske Skog is a world leading producer of publication paper with strong market positions and customer relations in Europe and Australasia. The Norske Skog Group operates four mills in Europe, two of which will produce recycled containerboard following planned conversion projects. In addition, the Group operates two paper mills and a wood pellets facility in Australasia. Norske Skog aims to further diversify its operations and continue its transformation into a growing and high-margin business through a range of promising fibre projects. The Group has approximately 2,300 employees in five countries, is headquartered in Norway and listed on the Oslo Stock Exchange under the ticker NSKOG.

Presentation and quarterly material
The company will not hold a live presentation due covid-19 restrictions but will arrange a webinar at 08:30 for pre-registered participants. The presentation, the quarterly financial statements and the press releases are published on www.newsweb.no under the ticker NSKOG. If you want to receive future Norske Skog press releases, please subscribe through the website of the Oslo Stock Exchange www.newsweb.no.