Norske Skog’s EBITDA in the second quarter of 2021 was NOK 17 million, a decrease from NOK 112 million in the first quarter of 2021. The markets are still somewhat impacted by the Covid-19 imposed restrictions, but are expected to improve during the second half of the year as a result of substantial capacity closures and expected sales price increases. As announced earlier, Norske Skog’s board of directors made a EUR 250 million investment decision to convert one machine at the Golbey (France) industrial site from newsprint to recycled containerboard. This is the second major step of the two planned European conversion projects in the group’s strategy of establishing Norske Skog as a leading independent European producer of recycled containerboard.

- The substantial capacity closures during the Covid-19 pandemic period have eliminated the huge imbalance in both the newsprint- and magazine paper markets. Therefore, we expect substantial price hikes during the second half of 2021, especially in the European markets. The decision to convert a Golbey newsprint machine into packaging will further diversify our asset base and create new long-term revenue and cash flows from 2023. Our other fibre and energy projects are progressing according to plan, and will contribute to a long-term sustainable industrial platform, says Sven Ombudstvedt, CEO of Norske Skog.

Cash flow from operations was NOK -190 million in the quarter compared to NOK 163 million in the previous quarter, mainly due to a combination of low sales prices and higher energy and recovered paper costs during the quarter. Operating earnings in the second quarter of 2021 were NOK -277 million compared to operating earnings in the first quarter of 2021 of NOK 204 million. The quarter was negatively affected by restructuring expenses, mainly related to the closure of the Tasman mill, amounting to NOK 160 million. Net loss in the quarter was NOK 355 million compared to a net profit of NOK 194 million in the previous quarter. Net interest-bearing debt was NOK 779 million at the end of the second quarter, with an equity ratio of 41 %.

“The packaging business will become an important and strong part of Norske Skog’s business going forward. These conversions will increase the value of the Bruck and Golbey industrial sites, and in few years, the majority of our mills will be able to both serve publication paper and packaging markets in a sustainable and profitable manner,” says Norske Skog’s CEO Sven Ombudstvedt.

Norske Skog actively works to realise value from the industrial sites by developing existing infrastructure and industry competence. The work to develop CEBINA into a widely acknowledged commercial product has continued in the quarter. The continued development of CEBICO (bio composites) also progressed well in the quarter. The investment in a NOK 20-25 million extruder, enabling a significant increase in the ability and quality of testing with potential customers, progressed further in the quarter. 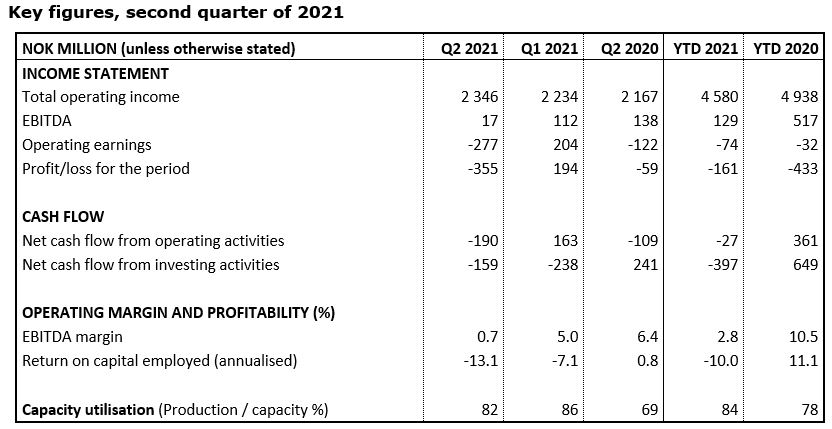 Europe
Operating income increased from the previous quarter with higher sales volumes combined with a slight increase in sales prices due to a tighter publication paper market  in the quarter. Variable cost per tonne increased in the quarter mainly due to higher energy and recovered paper costs. Fixed costs increased slightly due to higher deliveries. According to Eurograph, demand for standard newsprint in Europe decreased by 16% through April compared to the same period in 2020. SC magazine paper demand decreased by 5%, while demand for LWC magazine paper declined by 11%. Our capacity utilisation was 85% in the quarter, down from 88 % in the previous quarter. In general, the demand for our main product groups has improved in the second quarter.

Australasia
​Operating revenue and operating earnings were in line with the previous quarter, in which price increases were offset by reduced sales volume. Variable costs per tonne were somewhat lower compared to the previous quarter because of lower distribution costs due to reduced export volumes. Employee benefit expenses were largely unchanged but increased on a per tonne basis due to lower sales volume. According to official trade statistics, demand for newsprint in the second quarter in Australasia increased by 21% compared to the same period in 2020. Capacity utilisation was 69% in the period, significantly down from 79% in the previous quarter, due to reduced production as a consequence of the high and volatile energy prices in the region.

The decision to close the Tasman mill on the 30 of June, after 66 years of production, addressed the substantial imbalance between newsprint production capacity and customer demand in the Australasian region. The Tasman site asset sales are expected to be completed during the second half of 2021 with an expected net positive cash effect of approximately NZD 20 million.

In addition, the strong demand for packaging grade paper has switched some of the publication paper production to interliner contributing to an improved market balance in the coming periods. The closures and high operating rates, combined with increased prices for paper for recycling and other input costs have resulted in considerable price increases from 1 July 2021 for all of the groups products in both Australasia and Europe. The margins in the industry in the quarter are not sustainable at the current level, and the increased input cost is driving considerable price increases in the second half of 2021.

Norske Skog continues its work to improve the core business and has margin protection programmes with cost saving initiatives of approximately NOK 200-250 million. With the Final Investment Decision regarding the conversion projects at Bruck and Golbey during the second quarter 2021, Norske Skog will continue to progress the projects and market work in accordance with the plans. Norske Skog will also focus on developing the new business opportunities for nano cellulose products from CEBINA and biocomposites from CEBICO. The start-up of pilot production of the CEBICO will be in the fourth quarter of 2021 with delivery of larger test volumes to potential customers. Norske Skog will also continue its focus on environmental issues by reducing CO2 emissions and develop technology in co-operation with others, such as the partnerships with Ocean GeoLoop and Borg CO2.

About Norske Skog
Norske Skog is a world leading producer of publication paper with strong market positions and customer relations in Europe and Australasia. The Norske Skog Group operates four mills in Europe, two of which will produce recycled containerboard following planned conversion projects. In addition, the Group operates one paper mill in Australia and a wood pellets facility in New Zealand. Norske Skog aims to further diversify its operations and continue its transformation into a growing and high-margin business through a range of promising fibre projects. The Group has approximately 2 150 employees in five countries, is headquartered in Norway and listed on the Oslo Stock Exchange under the ticker NSKOG.

Presentation and quarterly material
You can read and download the complete Q2 2021 report here.