Norske Skog’s EBITDA in the third quarter of 2021 was NOK 111 million, an increase from NOK 17 million in the second quarter of 2021. Sales price increases in the quarter were offset by unprecedented increases in raw material costs, in particular energy. The utilization rate was very high due to a tightened market for publication paper following significant capacity closures and post Covid-19 demand recovery across all grades. Following the quarter, Norske Skog successfully financed the EUR 350 million containerboard conversion investment with debt facilities of EUR 265 million.

The substantial capacity closures have eliminated the imbalance in both the newsprint and magazine paper markets. There have been substantial price hikes in the European markets during the third quarter caused by the unprecedented volatile energy and raw material costs situation currently experienced in Europe. These cost increases are expected to continue and may necessitate further price increases in the fourth quarter of 2021 and into 2022,” says Sven Ombudstvedt, CEO of Norske Skog.

Cash flow from operations was NOK -99 million in the quarter compared to NOK -190 million in the previous quarter, negatively impacted by employee redundancy payments in the quarter of NOK 129 million at the Tasman mill in New Zealand. Operating earnings in the third quarter of 2021 were NOK -565 million compared to operating earnings in the second quarter of 2021 of NOK -277 million. The quarter was negatively affected by non-cash changes in fair value of energy contracts in Norway amounting to NOK -551 million. Net loss in the quarter was NOK 602 million compared to a net loss of NOK 355 million in the previous quarter. Net interest-bearing debt was NOK 1 052 million at the end of the third quarter, with an equity ratio of 35%.

Status projects
The final investment decisions to convert one newsprint machine both at Golbey and Bruck will add 760 000 tonnes of cost-competitive and low-emission containerboard capacity. The containerboard production will be fully based on recycled fibre, and will use green energy generated from the construction of a new waste-to-energy plant at the Bruck industrial site and a new biomass plant at the Golbey industrial site. Following the quarter, Norske Skog entered into debt facility agreements with an aggregate amount of EUR 265 million to finance the EUR 350 million investment into the recycled containerboard projects. The commercial terms are attractive and support the highly competitive profile of the containerboard projects.

“Packaging production will become a vital part of Norske Skog’s future business. The conversion of the Bruck and Golbey newsprint machines into packaging will further diversify our asset base and create new long-term revenue streams from 2023. The machine conversions and energy plants will increase the value of the Bruck and Golbey industrial sites, and we will shortly be able to both serve publication paper and packaging markets in a sustainable and profitable manner. Our other fibre and energy projects are progressing according to plan, and will contribute to a long-term sustainable industrial platform,” says Norske Skog’s CEO Sven Ombudstvedt.

The continued development of CEBICO (bio composites) also progressed well in the quarter. The installation of a NOK 25 million extruder, enabling a significant increase in the ability and quality of testing with potential customers, will be completed in the fourth quarter of 2021.

Through the partnership with Ocean GeoLoop at Norske Skog Skogn and Borg CO2 at Norske Skog Saugbrugs, Norske Skog aims to pursue the opportunity to become CO2 net negative, and to explore economically viable models for utilisation of biogenic CO2. 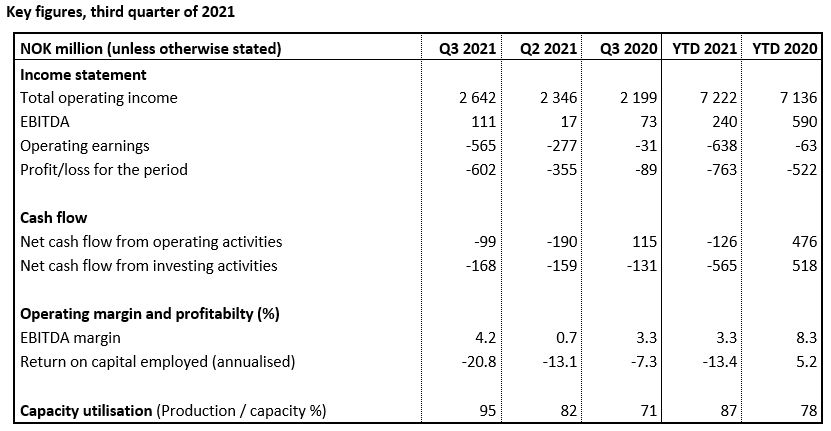 Europe
Operating revenue increased from the previous quarter with both higher sales volumes and sales prices. Price increases have been driven by unprecedented pan-European increases in energy and other raw material costs, as well as an increasingly tigher publication paper market following substantial capacity closures and demand recovery. Variable cost per tonne increased in the quarter due to significantly higher energy prices and cost of other raw materials. Fixed costs per tonne decreased slightly due to higher deliveries. According to Eurograph, demand for standard newsprint in Europe decreased by 3% through July compared to the same period in 2020. Both SC magazine and LWC paper demand increased by around 1% through July compared to the same period last year. Capacity utilisation was 96% in the quarter, up from 85% in the previous quarter.

Australasia
Operating income decreased compared to previous quarter due to lower delivery volumes as a result of Tasman ceasing paper production, but was somewhat offset by a slight price increase mainly due to reduced exports. Variable costs per tonne were higher compared to the previous quarter because of higher energy and raw materials costs. Employee benefit expenses were largely unchanged but increased on a per tonne basis due to lower sales volume. According to official trade statistics, demand for newsprint in the third quarter in Australasia increased by 1% compared to the same period in 2020. Capacity utilisation was 87% in the period, significantly up from 69% in the previous quarter, due to the cessation of paper production at Tasman.

Outlook
Energy and raw material markets have become highly volatile and uncertain during the third quarter, and the situation continues into the fourth quarter. The unprecedented increases for the largest input factors do not show signs of being alleviated any time soon. The industry has seen significant capacity closures and capacity dedicated to packaging grades, which have positively impacted the market balance. Additional capacity closures have been announced for 2022 and 2023, including the conversion of Norske Skog’s Bruck PM3 (2022) and Golbey PM1 (2023). Operating rates are expected to remain high in the industry for the remainder of 2021 and into 2022.

The increased prices for energy, recovered paper and other input costs, coupled with significant industry closures and high operating rates resulted in publication paper price increases for all grades in Europe from 1 July 2021. However, the unprecedented cost increases are expected to continue and have necessitated further price increases in the fourth quarter of 2021 and into 2022.

The sales process for the Tasman mill has progressed through the quarter, with settlement for the sale of energy contracts, and the payment of employee redundancy costs. The complete settlement of the Tasman sale is expected to provide a net positive cash contribution of NZD 15-20 million. For Nature’s Flame, a 60 000 tonnes capacity expansion study is underway. A sales process for the asset will likely be concluded in 2022.

With the final investment decisions taken for conversion to containerboard at both Bruck and Golbey, and financing secured for both projects, Norske Skog will continue preparatory site work at both locations as planned and undertake required commercial work going forward. Norske Skog will also focus on developing business opportunities for CEBINA and CEBICO. This means in particular to enter into international sales arrangements for CEBINA, and to complete the construction of the CEBICO (bio composites) pilot facility to be operational during the fourth quarter of 2021. The pilot facility will enable production and delivery of larger qualification test volumes to potential customers. Norske Skog will also continue its focus on environmental issues and reducing its CO2 emissions, and will develop technology in cooperation with partners such as Ocean GeoLoop.

About Norske Skog
Norske Skog is a world leading producer of publication paper with strong market positions and customer relations in Europe and Australasia. The Norske Skog Group operates four mills in Europe, two of which will produce recycled containerboard following ongoing conversion projects. In addition, the Group operates one paper mill in Australia and a wood pellets facility in New Zealand. Norske Skog aims to further diversify its operations and continue its transformation into a growing and high-margin business through a range of promising energy and fibre development projects. The Group has approximately 2 150 employees, is headquartered in Norway and listed on the Oslo Stock Exchange under the ticker NSKOG.

» Download the collection of Q3 documents
» Go to the webcast