Norske Skog’s EBITDA in the first quarter of 2022 was NOK 610 million, an increase from NOK 422 million in the fourth quarter of 2021. Sales prices for all grades increased in the quarter as a consequence of unprecedented high energy costs in Europe and a tightened publication paper market situation. The European mills operated at full capacity during the quarter. The pellets facility Nature’s Flame was sold at a gain of NOK 175 million in the quarter.

“We have been able to sustain normalised margins on our publication paper products despite the price volatility on raw material and especially energy during the quarter. Following significant capacity closures in the industry over the last two years, the demand for publication paper now exceeds available capacity, causing our mills to run at full capacity,” says Sven Ombudstvedt, CEO of Norske Skog.

Cash flow from operations was NOK 196 million in the quarter compared to NOK 317 million in the previous quarter, positively impacted by the improved operating margins, but negatively impacted by change in working capital, being mainly an increase in trade and other receivables. Operating earnings in the first quarter of 2022 were NOK 593 million compared to operating earnings in the fourth quarter of 2021 of NOK 479 million. Net profit in the quarter was NOK 583 million compared to a net profit of NOK 400 million in the previous quarter. Net interest-bearing debt was NOK 924 million at the end of the first quarter, with an equity ratio of 37%.

Norske Skog sold the Nature’s Flame pellets company  for a consideration of NZD 47.8 million to Talley’s Group, a New Zealand-based food company in the quarter. The gain recognised on the sale in the quarter was NOK 175 million.

Status projects
“Today, we have the official opening of the waste-to-energy plant at Bruck. Reliable access to affordable sources of green energy will be crucial for the long-term competitiveness at Bruck.  The completion of the energy plant along with the conversion project demonstrate our long-term committment to the Bruck mill. In addition, our fossil carbon footprint at Bruck will be reduced significantly by this new energy plant”, says Ombudstvedt.

The conversion of one newsprint machine both at Golbey and Bruck will add 760 000 tonnes of cost-competitive and low-emission containerboard capacity. The containerboard production will be fully based on recycled fibre, and will utilise green energy generated from the new waste-to-energy facility at the Bruck industrial site and a new biomass plant at the Golbey industrial site. These investments are financed by a debt facility agreements with an aggregate amount of EUR 265 million, having an average maturity towards the end of 2030.

“We are proud of being able to both serve the publication paper and the packaging paper markets in a sustainable and profitable manner in the near future,” says Ombudstvedt.

Norske Skog actively works to realise value from its industrial sites by developing existing infrastructure and industry competence. The continued development of CEBICO (bio composites) also progressed well in the quarter. Through the partnerships with Ocean GeoLoop at Norske Skog Skogn and Borg CO2 at Norske Skog Saugbrugs, Norske Skog aims to pursue the opportunity to become CO2 net negative, and to explore economically viable models for utilisation of biogenic CO2.

In addition, Norske Skog aims to eliminate the use of fossil-based means of transportation by 2050. Annually, Norske Skog uses around 2-2.5 million tonnes of recovered paper, wood and wood chips at the European mills.

“The implementation of the green transition in European industry and the fulfillment of emission obligations in the Glasgow agreement will require that our inbound and outbound transport take place with emission-free transport solutions. Norske Skog Saugbrugs is a very good example. From May 2022,  all long distance inbound transport of wood and wood chips to the mill will be on rail”, says Ombudstvedt. 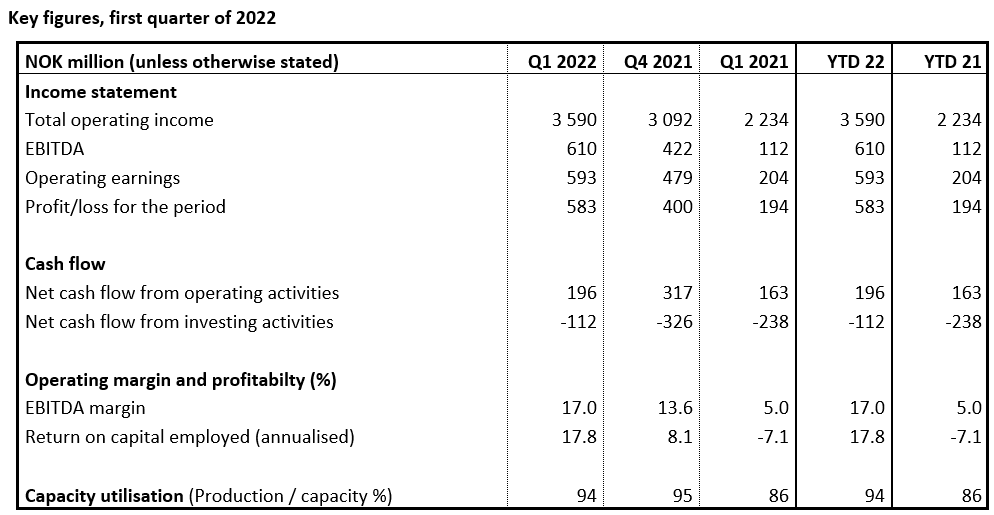 According to official Australian trade statistics, demand for newsprint in the first quarter in Australasia decreased by  8% compared to the same period last year.

Outlook
The unprecedented increases and volatility seen for the largest input factors, particularly energy, are expected to remain in the coming months. The continued price pressure for energy, recovered paper and other input costs in 2022 may result in further publication paper price increases for all grades in Europe.

The ongoing invasion of Ukraine by Russia continues to create uncertainty in the development of the global economy and raw material markets and in particular the European energy markets, which is important for Norske Skog’s operations. Disruptions in global supply chains may cause further operational challenges in 2022.

The waste-to-energy facility at Norske Skog Bruck is in the commissioning phase and is currently operating at 75% utilisation. The facility will substantially reduce gas consumption, and thus, CO2 emissions for Norske Skog Bruck.

Norske Skog continues to develop business opportunities for CEBINA and CEBICO. This includes evaluating a potential capacity increase for CEBICO beyond the existing 300 tonnes annual pilot-scale capacity. The pilot facility will enable production and delivery of larger test volumes.

About Norske Skog
Norske Skog is a world leading producer of publication paper with strong market positions and customer relations in Europe and Australasia. The Norske Skog Group operates four mills in Europe, two of which will produce recycled containerboard following ongoing conversion projects. In addition, the Group operates one paper mill in Australia. Norske Skog aims to further diversify its operations and continue its transformation into a growing and high-margin business through a range of promising energy and bio product development projects. The Group has approximately 2 100 employees, is headquartered in Norway and listed on the Oslo Stock Exchange under the ticker NSKOG.